US vs Canada President Cup

US vs Canada President Cup 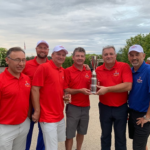 Club in Marengo Illinois.  PAGC of Chicago was the main host and our President Adam Kieta was the US team Captain.

The festivities started on Thursday with match play between PGAC of Toronto and Polish American Golf Club Chicago. The final score was 4:3 in favor for PAGC Chicago.

First round of President Cup was played in format of better ball , and was won by US 7:0 .

The winning pairings for US :

Points was won by teams of  Kuba Miskiewicz and Joe Basiorka , Mark Bidus and Casy Budz , Adam Dziekonski and Zenek Piersa , Lukasz Halupka and Bogdan Branas , Marcin Szostak and Lester Kwiecien. After 2 rounds of play, US was winning 11 1/2 to 2 1/2 .

Congratulations to US Team for winning the President Cup for the second time.

At the end we would like to thank the Canadian golfers for the competition in a very friendly manner , you guys are first class, thank you , and hopefully we will play again in 2 years in Toronto.

President Cup competition was possible because the contributions from all US Clubs , PAGC , Podhale GC , Polonia GC , PAGC 0f Michigan , PAGA and UPGCA from New York. Thank You very much.

Last but not  list big thank you to people who coordinate the event and make it a success , Krzysztof Placek was the main coordinator  ( tee time reservations , lunches and award banquet after the game ) . Adam Kieta for organizing and hosting all golfers at his property after the match play . Thank you guys with out your efforts the event will not be so successful .